FIRST Tech Challenge (FTC) had a kickoff event September 21 2019 for the SKYSTONE game in Vancouver. There was a good turnout and we have lots of new teams in Vancouver. I was there to help set up and demonstrate the Rev Control Hub, a new robot controller for FTC.

END_OF_DOCUMENT_TOKEN_TO_BE_REPLACED

On January 24, BC held it’s second FTC League event at St. Michael’s University School in Victoria BC. Ten teams from BC and two from Washington State participated. I volunteered as the Field Technical Advisor. END_OF_DOCUMENT_TOKEN_TO_BE_REPLACED

Yesterday December 16 I was with the FIX IT 3491 team in Washington State to attend the FTC Pasteur Interleague event. 35 FIRST Tech Challenge robotics teams competed.

I’ve been busy lately with FIRST volunteering, most recently as Field Technical Advisor and Field Inspector at the BC FTC League One event held at UVIC November 19. Ten teams participated in a fun-filled afternoon of robot competition. 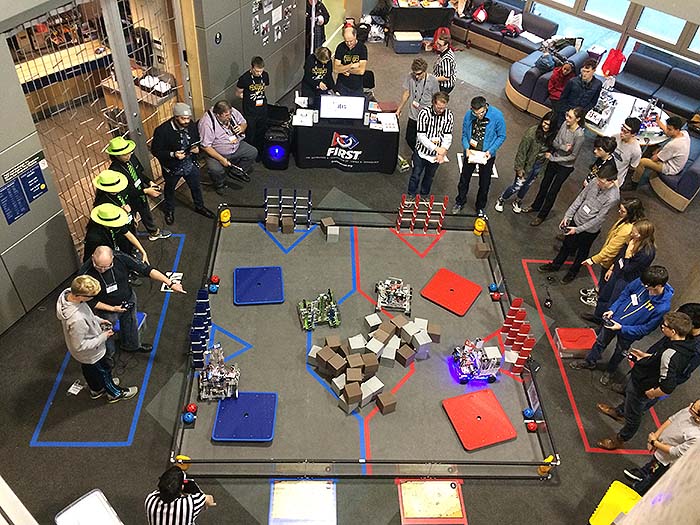 END_OF_DOCUMENT_TOKEN_TO_BE_REPLACED

I have been very busy this past year with FIRST.  The mission of FIRST is to inspire young people to be science and technology leaders, by engaging them in exciting Mentor-based programs that build science, engineering, and technology skills.

In addition to looking after the FIRST BC website, I’ve been volunteering at FIRST events and supporting team FIX IT 3491.

The big news is that FIX IT won the Inspire Award at the Houston FIRST Tech Challenge World Championship in Houston Texas.

But there was so much that happened before that.

END_OF_DOCUMENT_TOKEN_TO_BE_REPLACED

Just a quick note about loggly.com and AWS logging from S3 and CloudFront. Previously I had looked into parsing CloudFront logs with AWSTATS, just because I’ve used that in the past. That should be possible, but I gave up on it after a few hours. END_OF_DOCUMENT_TOKEN_TO_BE_REPLACED

I’ve been thinking about the Ubuntu 14 LTS to 16 LTS upgrade for awhile. It seemed like it was do-able, though comments on some web sites indicated lots of problems including bricked systems. I made sure I had a snapshot before I gave it a try.
sudo apt-get install update-manager-core
sudo do-release-upgrade

The trickiest part was resolving configuration file updates. But you can preview the differences and they were mostly changes I had made specifically so I kept the old config file.

Naturally, the upgrade broke things. Fortunately, not too badly.

PHP was the main problem. The upgrade un-installed PHP 5 without a replacement. Fortunately PHP 7 installed ok, though I had to re-visit my notes about what else to install, like php7.0-mysql, so WordPress would be happy. That took a couple of re-tries to find all the missing modules such as php7.0-mbstring, php7.0-mcrypt, php7.0-xml, php7.0-xmlrpc which weren’t a problem until BackWPup tried to run.

I’ve been busy working on the new FIRST Robotics BC website. Just a basic WordPress site hosted on my AWS EC2 instance. I started a WordPress child theme to tweak some of the CSS. Even used Photoshop to prepare some of the images.

But what’s really interesting is what FIRST Robotics BC is up to. FIRST engages students in science, technology, engineering and math (STEM) through participation in research and robotics programs. One of the high school programs (grades 7-12) is called FIRST Tech Challenge(FTC). Teams are challenged to design, build, program, and operate robots to play a floor game in an alliance format.

There will be a FTC Kickoff event in Victoria BC on September 17. Find out more about FIRST, FIRST Tech Challenge, and this year’s robot game.