I’ve been thinking about the Ubuntu 14 LTS to 16 LTS upgrade for awhile. It seemed like it was do-able, though comments on some web sites indicated lots of problems including bricked systems. I made sure I had a snapshot before I gave it a try.
sudo apt-get install update-manager-core
sudo do-release-upgrade

The trickiest part was resolving configuration file updates. But you can preview the differences and they were mostly changes I had made specifically so I kept the old config file.

Naturally, the upgrade broke things. Fortunately, not too badly.

PHP was the main problem. The upgrade un-installed PHP 5 without a replacement. Fortunately PHP 7 installed ok, though I had to re-visit my notes about what else to install, like php7.0-mysql, so WordPress would be happy. That took a couple of re-tries to find all the missing modules such as php7.0-mbstring, php7.0-mcrypt, php7.0-xml, php7.0-xmlrpc which weren’t a problem until BackWPup tried to run.

I’ve been busy working on the new FIRST Robotics BC website. Just a basic WordPress site hosted on my AWS EC2 instance. I started a WordPress child theme to tweak some of the CSS. Even used Photoshop to prepare some of the images.

But what’s really interesting is what FIRST Robotics BC is up to. FIRST engages students in science, technology, engineering and math (STEM) through participation in research and robotics programs. One of the high school programs (grades 7-12) is called FIRST Tech Challenge(FTC). Teams are challenged to design, build, program, and operate robots to play a floor game in an alliance format.

There will be a FTC Kickoff event in Victoria BC on September 17. Find out more about FIRST, FIRST Tech Challenge, and this year’s robot game.

Monte Carlo Tree Search (MCTS) is a heuristic search algorithm that can make game play decisions. It does this by attempting to determine the most promising move from those available. What’s interesting is that the algorithm just needs to know the game rules and winning conditions, it doesn’t need domain knowledge. Another advantage is that it can be interrupted or constrained by a time limit and will produce the most promising move found so far.

I built a Tic Tac Toe player a couple of years ago and while upgrading Unity recently I thought I’d try building it for the web so I built a WebGL version.
END_OF_DOCUMENT_TOKEN_TO_BE_REPLACED

It looks like the move to AWS will save me about 80% off my previous hosting costs. The AWS cost forecast for this month is $17 versus $108 for the old VPS. I also outsourced mail server hosting to FastMail for $45 for the year. I’ll probably have to wait a couple of months to see how things average out.

END_OF_DOCUMENT_TOKEN_TO_BE_REPLACED

I just moved my old Webmaster pages to S3. While checking things out I noticed I had hosted a Unity 3D web game on an old AWS instance that’s not up anymore. I don’t plan on bringing up the Node.js game server at this time, but the game is still playable, you just can’t save a high score.

END_OF_DOCUMENT_TOKEN_TO_BE_REPLACED

I finally have Creative Kids at Home working the way I want on Amazon Web Services.

The pages are hosted in AWS S3 as a static website. AWS Cloudfront provides the content delivery network (CDN). AWS Route 53 provides domain name system (DNS). So everything is off my old virtual private server.
END_OF_DOCUMENT_TOKEN_TO_BE_REPLACED

Well, I appear to be up and running using Amazon AWS after the DNS change. I’m using W3 Total Cache (W3TC) which minifies, zips and caches Javascript and CSS to Amazon S3. It also copies images there too. I was thinking of adding Cloudfront too, but probably not needed at this time.

END_OF_DOCUMENT_TOKEN_TO_BE_REPLACED

I’m moving web hosting from RackForce to Amazon AWS with S3 and Cloudfront.

RackForce used to be a great VPS host offering a wide variety of plans and unlimited bandwidth which I needed for one of my sites. But they refocused on enterprise customers and then downgraded performance on the VPS that I had with them.

I finally made time to move things and decided to try Amazon as I’ve used them in the past for small demo projects.

We’ll see how this goes, but I think it should be ok.
Mike.

I’m at the Acres of Art festival on the grounds of the Coast Collective today July 7. 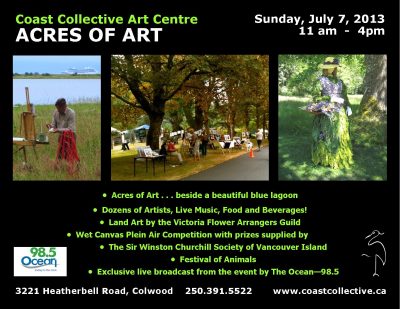 It’s been awhile since I’ve posted, but my photos are still roaming. My Coast Collective roaming gallery has moved to the Westshore office of Stevenson Luchies And Legh in Langford at Suite 103 – 2849 Peatt Road. You can view the photos in the lobby area during office hours.  They will be on display until the end of May.